A competition held by ECU

This is the official invitation to all National Chess Federations of ECU to participate.
The organizer invites all senior Ladies and Gentlemen throughout the European Countries to participate at the ECU Senior Individual Chess Championship (50+ 65+), which is to be held in Acqui Terme AL – Piedmont, from 25.05 arrival day till 04.06 departure day.
All players shall have reached their age of 50 and 65 (by December 31st of the year in which the tournament will commence). In accordance with the ECU tournament rules, the Championship will be played in four categories: age 50+ and 65+ (Open and Women).

Our target is to organize the ECU Senior Individual Chess Championship at best, spreading the tradition of hospitality and good living typical of Italy.
The players will certainly be interested in the programme, which will be lively and supplemented by several additional events, Blitz Tournament, and tastings of local products.
As usual you will find in the prospect, the hotels available, rules and application form. You will also find a small map for an easier arrival.
Tournament Director: International Arbiter and FIDE International Organizer Cristina Pernici Rigo. 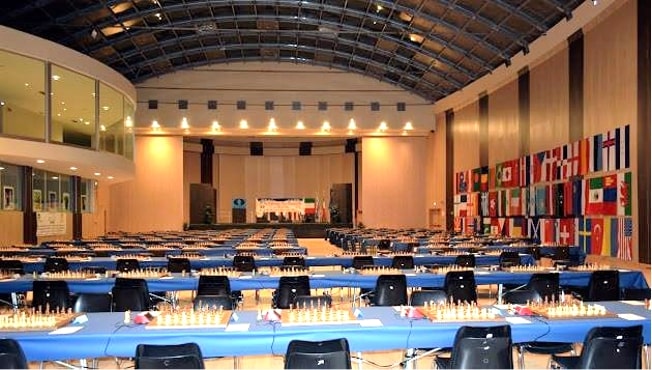 The Championship shall be played in 9 rounds of the Swiss System. The time is 90 minutes for 40 moves followed by 30 minutes for the rest of the game with an addition of 30 seconds per move starting from move 1.

Default time at the start of all 9 rounds is 30 minutes.

Participation: player who is registered by his/her federation with FIDE ID.
The Women Tournament will be played separately if there are more than 9 participants in total.
According to the ECU regulations if there are less than 9 women participants in one age group the tournament merges with the respective open category.
F. e if the ladies 65+ are less than 9 will play in open 65. The prizes remain for the women, but they can also play for the open prizes.
The ECU Officials (Chief Arbiter, Deputy Arbiter, Appeals Committee and FIDE Technical Delegate) will be appointed by FIDE in due time.
Arbiters team will cover the following languages: ITA, GER, ENG, ESP, POR, FRA, DEN, ISR, GRE.
Appeals procedure:

Protests, including protests against decisions of the Chief Arbiter or his assistants, or the Tournament Director, must be submitted in written form to the Chairman of the appeals committee within one hour after completion of the respective game. The protest must be accompanied with the sum of 200 EUR or the equivalent in local currency, as a deposit from the signatory. The deposit must be handed to the Chairman of the appeals committee. If the appeal is granted, the sum shall be returned immediately. If the appeal is refused, the deposit is forfeited to the European Chess Union. The decisions of the Appeals Committee are final.

The order of players that finish with the same number of points shall be determined by application of the following tie-breaking procedures in sequence, proceeding from (a) to (b) to (c) to (d) to (e) the extent required:

In the case of unplayed games, for the calculation of tiebreak criteria the current FIDE Competition Rules shall be applied.

A player can get one prize only. According to the ECU Tournament Rules and regulations, the money prizes will be equally shared among the players with the same score. If one of the prize winners is absent during the closing ceremony, then: his/her money prize will be reduced by 20 % with a minimum of 100 €. Any other prize (medal, trophy) will not be awarded as long as a penalty of 100€ has not been paid. The money will be forfeited to ECU.

To be registered and booked only through the Organising Committee (accommodation price per person, daily, including water during meals),
Additional nights are possible upon request and in proportional discount.

Registration fee: Each player has to pay € 120,00 as registration fee for the event (is including ECU fee).
It includes registration, accreditation, badge, ECU fee, free tour in Acqui, and one wine-tasting.
The registration period ends on May 14, 2023, after this the entry fee is € 170,00.
Each participant is advised to stay in one of the official hotels. Exceptions can be made for local players. Players who choose another hotel than the official ones will take the risk of their transportation to the playing venue, security, and all official tournament information.
Registration without using official hotels € 240,00.

All entries shall be confirmed by the Tournament Director and rooms will be booked after a deposit payment, free of bank charges.
The receipt of the deposit payment must also be sent via email to the Organising Committee. The remaining balance shall be paid upon arrival and no later than the start of the 2nd round.
Official and accompanying person must pay only the hotel booking and transfer if needed.
The amount of € 420,00 must be transferred (free of bank charge) to the following Bank Account:
Account Holder: Comitato ARCOWORLDCHESS - Pernici Rigo Cristina
Bank: Cassa Rurale Alto Garda Arco (TN) Italy
Bank Adress: viale Magnolie 1 Arco (TN) Italy
EU IBAN IT86 G080 1634 3100 0000 0383445
cod BIC/SWIFT CCRTIT2T04A (all fee loading to order)
Module registration

The ECU Anti-Cheating guidelines are valid for ECU Senior Individual Chess Championship 2023.
The anti-covid protocol in force at the time of the event will be implemented.

Airline passengers must inform the organizer in time (deadline May 04), sending the schedule by mail info@arcoworldchess.com, with name, flight details, time of arrival and departure.
Organizers can provide private transportation with taxi in any other date and another airport, with an additional cost.